Early diagnosis and surgery performed by skilled hands are the two main factors to ensure the best outcome.

It is a serious visual problem that can occur at any age, but usually occurs in middle-aged individuals or in the elderly. It is more common in people who are myopic or in those who have previously had a disorder in the retina.

Retinal detachment affects one in 10,000 people per year.

What causes it?
Most retinal detachments are caused by the presence of one or more tears in the structure of the retina.

Inside the eye, in the defined cavity between the lens and the retina, is the vitreous body. The vitreous is a transparent gel that is slightly adhered to the retina on most of its surface but firmly adhered in some concrete points. Traction of the vitreous at these points can cause a tear or a hole in the retina.

The vitreous also undergoes the passage of time. Its ultrastructure is altered and its capacity to retain water is reduced, so it loses volume. Not being able to occupy all the interior space that corresponds to it has to be separated from the retina: it is the so-called posterior vitreous detachment. Most vitreous detachments occur naturally with aging in healthy eyes and do not cause damage to the retina. However, retinal tears appear in some patients. In other cases, such as in myopia, an inflammatory process or accidents with ocular trauma, vitreous detachment can occur in a more dangerous way.

In these cases, first, a tear occurs in the retina, through which the vitreous humor fluid penetrates below the photoreceptor layer, facilitating retinal detachment and subsequent detachment. The detached retina area can not function properly and will produce a zone of blurred vision or blindness.

Sometimes vitreous detachment causes a rupture of a retinal vessel and the discharge of blood into the vitreous cavity: this is called vitreous hemorrhage.
Some retinal detachments are caused by other eye diseases, such as tumors, severe inflammation or complications of diabetes. These are the so-called secondary retinal detachments, in which there are not always any tears or holes in the retina.

What are the symptoms of retinal detachment?
The most characteristic principle is the perception of floating blackheads, commonly called "flying flies" (miodesopsias) and flashes of light in their lateral vision (photopsies).

In other cases, patients may directly notice a ripple or veil in their vision or the appearance of a shadow in a lateral area of ​​the visual field (dark curtain). The development of a Retinal Detachment will reach the central vision and create a significant loss of vision if it is not treated quickly and effectively.

Although many people think the opposite: the retina does not hurt. Thus, all these processes only occur with visual symptoms without pain or discomfort.

How is retinal detachment diagnosed?
A detached retina is not visible from the outside of the eye. Consequently, if symptoms are noticed, consult an ophthalmologist as soon as possible. The ophthalmologist painlessly examines the retina and the rest of the internal structures of the eye using an instrument called an ophthalmoscope. Other special diagnostic instruments that may be used include special contact lenses, slit lamp, ultrasound and optical coherence tomography (OCT)

How is retinal detachment treated?
There is no eyewash and other pharmacological treatment that cures retinal detachment.
At an early stage, if the retina is torn and Retinal Detachment has not yet begun, it can be prevented by early treatment with laser applied at the clinic. It is the so-called retinal photocoagulation. Once the retina has detached, the only treatment is a series of surgical techniques that reapply the retina.

Surgical maneuvers of retinal diseases should be performed by Retinal Surgeons, ophthalmologists specialized in retina and with sufficient surgical training. It is a complex subspecialty for the great variety of cases and for the sophistication of the new instruments and operative techniques.

How can we prevent retinal detachment?
It is important for persons with myopia or relatives who have had retinal detachment to perform periodic eye exams by a Retinologist so that early detection of changes in the vitreous or retina can be achieved so that peripheral retinal lesions Predisponents with argon laser photocoagulation.

It is also important to review the contralateral eye in those who have already had retinal detachment in one eye.

Predisposing lesions are alterations that are observed in the peripheral retina and on which a relation with retinal ruptures leading to detachment is known statistically. The retinologist is the most knowledgeable of the degree of risk of each of the predisposing lesions to decide the validity of their preventive laser treatment.

The sudden appearance of flying flies (miodesopsias) or a sudden increase of those already existing, as well as the appearance of luminous flashes should be consulted quickly with your ophthalmologist or with an Ophthalmological Emergency Service.

Can retinal detachment lead to blindness?
More than 90% of retinal detachments can be cured, most in one operation, but some require several interventions. Thanks to the modern microsurgical techniques and the experience of the Retina Surgeons, fewer and fewer cases can not be resolved. Unfortunately these eyes can completely lose vision. 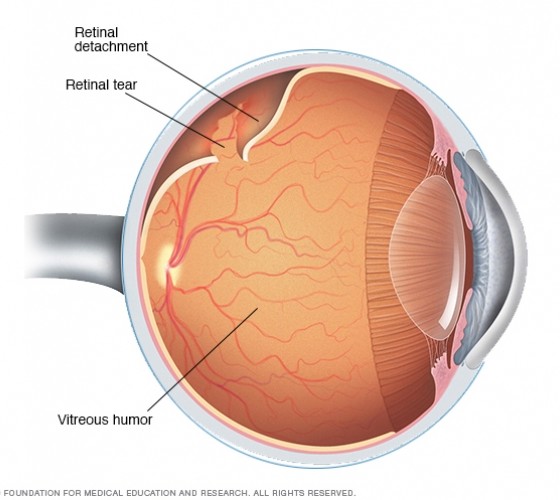 Your message was sent successfully. You will be contacted soon.